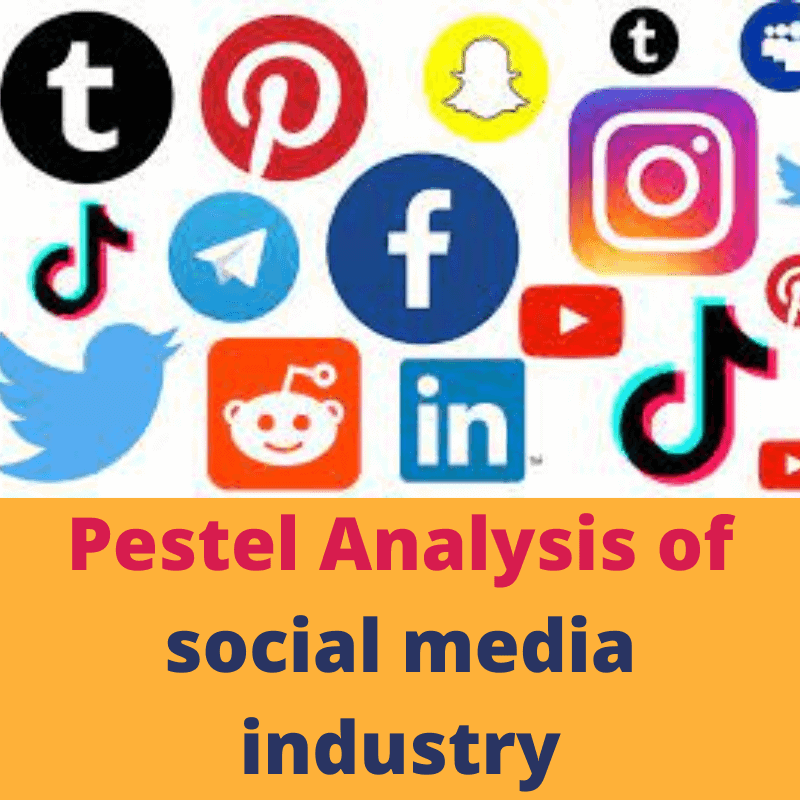 We will present in this publication the main results of the Pestel analysis of social media industry. The ultimate goal is to examine the impact of macro-environment factors on companies operating in the social networking industry worldwide.

What is pestel analysis?

Pestel model is an external strategic analysis tool widely used by companies to study the influence of the macro-environment on a company or an industry.

As a result, the Pestel model allows for identifying and evaluating current and potential opportunities and threats of the macro environment of an industry.

The ultimate goal of the Pestel analysis is to anticipate and adapt to the various changes in an industry’s macro-environment.

PESTEL is the acronym for six components of the global environment of a market: Political, Economic, Social, Technological, Ecological, and Legal.

The social networking industry has become one of the most popular and profitable markets in recent years. Recent research has shown that 75% of people worldwide use social networks.

Additionally, the social media industry is significantly boosting employability by generating a wide range of cutting-edge jobs, including community managers, IT developers, traffic managers, and many others. One thing is for sure: the career opportunities for young people will be very promising in the coming years.

A few dominant corporations monopolize the social networking market when it comes to competition, especially Google for search engines and Facebook for social media.

Let’s move on to the social media Pestel analysis!

It is obvious that the international political environment somehow impacts the results of the companies operating in the social media industry. Also, the political sphere is influenced by social media.

Also, Russia banned the use of Facebook and Instagram in March 2022 due to the war in Ukraine and political conflicts between the two countries.

In summary, political disputes between the U.S. government and other countries in the world are a serious threat to the growth of American social media platforms.

In addition, social networks, in theory, allow people to express themselves freely without using the traditional press. However, several political parties have accused social network actors of not sufficiently controlling the spread of fake news and contributing to the misuse of facts.

Even worse, heavy sanctions have been applied to social networking platforms!

The use of social networks is free for individuals. Therefore, the popularity and use of social media platforms don’t depend too much on the economic context.

However, the current global economic crisis due to the Covid-19 has forced consumers to reduce their budget to regular purchases of clothes, accessories, and entertainment. And the majority of these purchases are made online.

In short, the decline of macroeconomic indices ( unemployment, interest rates, inflation rates, etc.) has a dramatic effect on the sales and profits of social media platforms, which is a considerable threat to them.

The social environment allows you to examine the various demographic, social, and cultural changes of consumers, and to predict the positive or negative impact of these changes on the current and future performances of your business.

For the social media industry, it is evident that the change in consumer behavior in recent years represents a valuable opportunity for companies operating in this market.

This fact will enable social media companies to constantly improve their performance, increase their number of subscribers and ensure their sustainability in the future.

Nevertheless, many recent types of research focus on information fatigue due to the excessive use of social networks and their negative impact on the mental health of citizens.

In 1996, the American writer David Shenk was the first to talk about the concept of infobesity to describe the information overload of citizens.

The French scientist Joël de Rosnay, a specialist in the impact of new technologies on industries, described it as “a new form of brain pollution caused by an excess of information”. And the rise of 21st-century technologies has amplified the phenomenon.

The technological environment is the analysis of technological innovations in an industry. These technological developments can represent huge opportunities, or on the contrary, a source of threats to a company’s activity.

Social media giants like Facebook are constantly investing huge amounts of money in research and development of new technologies such as virtual reality, augmented reality, and artificial intelligence in order to maintain their market positions and counteract their competitors.

The ability to implement new technological solutions is an undeniable key success factor for any company working in the social media industry. The proof is that Internet users are constantly looking for innovative features.

Social media companies that miss out on these technological innovations risk seeing their market share drop. The technological challenge is really big!

Ecological influences refer to the new measures and standards regarding environmental protection and sustainable development. These ecological constraints are today sources of serious threats that can endanger the survival of a company.

And the social media industry is not immune to these pressures from governments, associations, and non-governmental organizations!

Infrastructures such as data centers and Internet routers are necessary for the good running of social media companies. There is no doubt that all these elements hurt the planet.

Social networking sites like Facebook, the world’s largest social network, contain a large amount of personal information of their users. As a result, these sites must follow and enforce some rules and regulations.

For example, the GDPR (General Data Protection Regulation) is a European regulation aiming at reinforcing data protection that social media companies and others must follow.

Following the famous Cambridge Analytica scandal, many Internet users are starting to worry about the security and privacy of their private data. Facebook is regularly the subject of legal debate.

In the end, this case study of social media Pestel analysis has helped us to analyze in-depth the social media industry environment.

As a result, we were able to identify the main opportunities and threats that social media companies should be considering when conducting their strategic planning in the coming years.

Certainly, the Pestel model is a very relevant and effective external strategic analysis tool. However, it must be combined with other analyses to better understand your industry’s environment.

These include Michael Porter’s Five Forces model to analyze the competitive intensity and attractiveness of your industry, the SWOT analysis, and the VRIO model to examine your company’s resources and distinctive competencies.

Hopefully, this example of social media Pestel analysis has helped you better understand the use and implementation of the Pestel framework in your company, don’t forget to share this article with your friends and family!