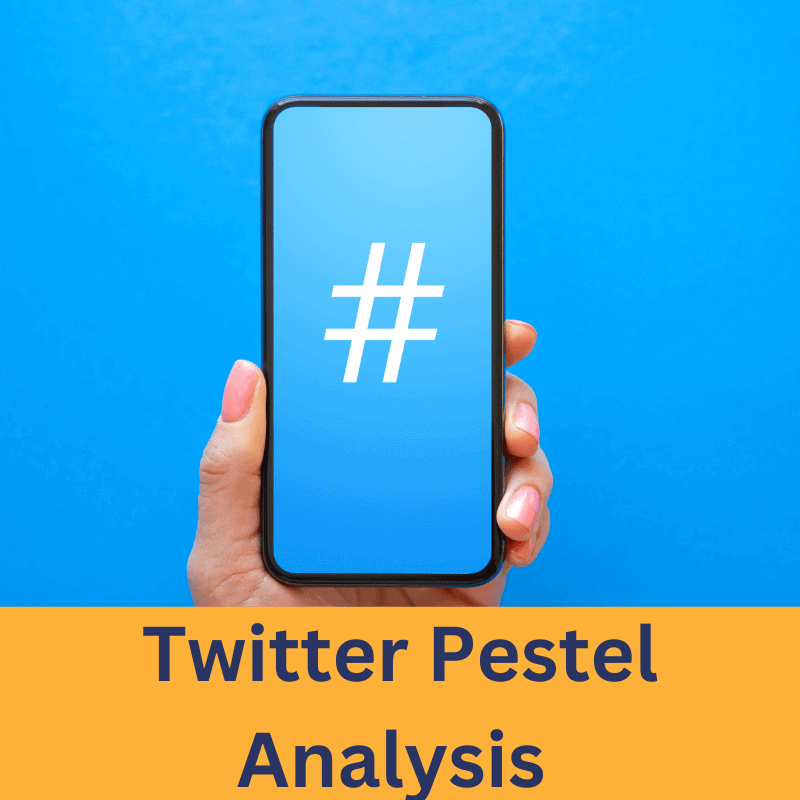 We’re going to examine the main insights of the Twitter Pestel analysis in this article. We aim to investigate how international business environment factors affect Twitter, Inc in 2022.

This free pestle analysis example will help you better understand the relevance and uses of the PESTEL framework.

The social media industry has been one of the fastest growing industries in the technology market and one of the most profitable markets in recent years.

The number of social media users has more than doubled since 2010 to over 2 billion and is expected to reach nearly 3 billion by 2020. In addition, recent research has shown that 75% of people worldwide use social networks.

Image by Edar from Pixabay

Twitter is a social media platform where users can post and engage with messages called “tweets.” Jack Dorsey, Noah Glass, Biz Stone, and Evan Williams founded Twitter in March 2006, and it became public in July of the same year.

With more than 25 offices worldwide, Twitter, Inc. is a California corporation with its headquarters in San Francisco. Here are some recent key statistics about Twitter:

Let’s move on to the Pestel analysis for Twitter!

Right now, We will present the results of our research about the Twitter macro environment.

For this reason, we will examine the political, economic, social, technological, ecological, and legal influences on Twitter’s performance.

Let’s start with the impact of political factors on Twitter’s performance. 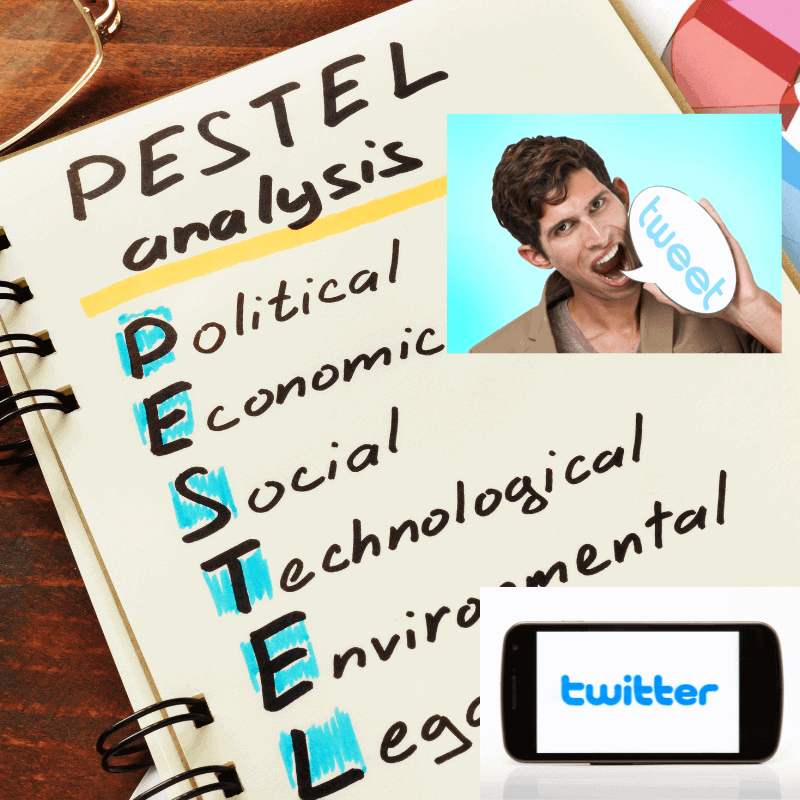 It is evident that the international political environment impacts the performance of companies that operate in the social media industry, like Twitter.

Also, the political scene is influenced by social media. As proof, Twitter is banned in China, Iran, and North Korea due to the political differences between the United States and these Asian countries.

Also, Russia has banned using Facebook and Twitter in recent months due to the war in Ukraine and the political tension between the two countries.

In short, the political conflicts between the U.S. government and other countries seriously threaten the growth and profitability of U.S. social media platforms like Twitter.

In addition, social networks allow people to express themselves freely without needing the traditional press. However, several political systems have accused Twitter of not sufficiently controlling the spread of false information and contributing to the misappropriation of facts.

On the one hand, the worldwide economic environment significantly impacts the performance and profitability of giant multinational companies like Twitter.

Therefore, the major economic indicators such as the inflation rate, the unemployment rate, labor market conditions, and the interest rates of each country influence positively or negatively the growth of the companies present there.

Thus, Twitter’s top management should consider the changes in these economic indicators to face the different threats and take advantage of the opportunities present in each market.

Moreover, the business profitability of Twitter Inc. is impacted by the budgets that the host country’s government has spent on core infrastructure development. A well-developed infrastructure facilitates the business environment and increases the growth potential of the industry in the respective country.

On the other hand, nobody can ignore the harmful effect of the COVID-19 crisis on consumer spending worldwide.

So, American social media giants like Twitter have noticed a temporary drop in revenues, especially at the beginning of the health crisis.

Let’s be clear. Digital advertisement is the primary source of revenue for these companies. So, any austerity policy implemented by companies selling their products and services online is a significant threat to the profitability and sustainability of Twitter.

Let’s start with the potential opportunities of Twitter’s social environment:

According to recent statistics, we have noticed that most Twitter users in the United States, for example, are young people between the ages of 25 and 34.

Thus, generation Z, also called digital natives, is an ultra-connected generation, and the time spent on their screens is constantly increasing.

All this data is a promising source of opportunities for Twitter in the future. These factors will enable social media firms to enhance their performance continuously, grow their subscriber numbers, and guarantee their longevity in the long run.

Nevertheless, because of the overuse of social networks and their harmful effects on people’s mental health, many recent studies have focused on information fatigue.
The term “infobesity” was initially used to describe people’s information overload in 1996 by American author David Shenk.

It was referred to as “a new sort of brain pollution induced by an excess of knowledge” by the French scientist Jol de Rosnay, who specialized in the effects of new technology on businesses. And the development of 21st-century technologies has made the problem more prominent.

The technological environment examines technological innovations in an industry, such as social networking platforms. These technological advancements may create enormous potential for businesses, or they may, on the other hand, pose severe risks to their operations.

Social media firms like Twitter continually invest vast amounts of money into researching and developing new technologies and functionalities like virtual reality, augmented reality, and artificial intelligence to preserve their market positions and compete with rivals.

Undoubtedly, one of the most critical success factors for any business operating in the social media sector is the capacity to adopt new technology solutions. The fact that Internet consumers are always looking for cutting-edge services is proof enough.

Missing out on these technological advancements could result in a decline in market share for social media companies. The technical challenge is enormous!

The new policies and guidelines for environmental protection and sustainable development are referred to as ecological influences.

These ecological restrictions are now sources of serious threats that could compromise the sustainability of companies like Twitter.

And the social media area is not excluded from these pressures from green associations, NGOs, and governments!

Infrastructures such as data centers and Internet routers are necessary for the excellent running of social media companies. But, unfortunately, there is no doubt that all these elements hurt the planet.

Regulations, including labor laws, trade laws, data protection laws, and other laws, are subject to change in the legal environment of each country where Twitter is present.

A lot of personal information about users is saved on social networking platforms. As a result, Twitter must follow and enforce some rules and regulations. If not, Twitter will risk facing future fines that are enormously high!

For instance, the most well-known Twitter scandal occurred in July 2020, when a 17-year-old ex-Minecraft scammer got control of over 130 accounts belonging to public figures, world leaders, and celebrity influencers. He did this without the use of any sophisticated technology.

The 17-year-old scammer called the Twitter headquarters and pretended to be from the IT Department. He then directed staff members to enter their admin credentials on a phishing website to get the certifications.

Within a few hours, he had control of Twitter. A total of $118,000 worth of bitcoin was stolen in the hack.

Many Internet users are beginning to worry about the security and privacy of their data in the context of the famous Cambridge Analytica scandal. In addition, Twitter and Facebook, the most popular social networks, are frequently the subject of legal debate.

In conclusion, social media companies like Twitter will face, in the following years, several threats and risks due to the legal environment.

In this Pestel analysis example, we have attempted to illustrate the significant opportunities and threats related to the macro business environment of the Twitter corporation.

PESTEL is a famous strategic tool to analyze the macro environment of an organization. PESTEL stands for – Political, Economic, Social, Technological, Environmental & Legal factors that impact the sustainability and profitability of Twitter, Inc.

As a result, it helps managers of Twitter to make the right decisions related to the strategic choices of their company through the anticipation of current and potential market opportunities and threats.

However, the Pestel analysis alone can not examine your company’s environment. Thus, we recommend you use other strategic planning tools and frameworks, such as Porter’s Five Competitive Forces model, the VRIO model, and the SWOT analysis.

It is useless to remind the impact of the environment on the activities and performance of companies. Therefore, the PESTEL analysis, also known as the PEST or PESTLE, focuses on the study of the global environment of your company.

Pestel analysis is a famous strategic planning tool that identifies and examines opportunities and threats in the macro-environment of your company.

PESTEL is the acronym for six primary components of the environment of a market: Political, Economic, Social, Technological, Environmental, and Legal.

The ultimate goal of this analysis framework is to anticipate and adapt to the various changes in the macro-environment of your industry. As a result, your company can make the most of the opportunities and better prevent environmental threats.