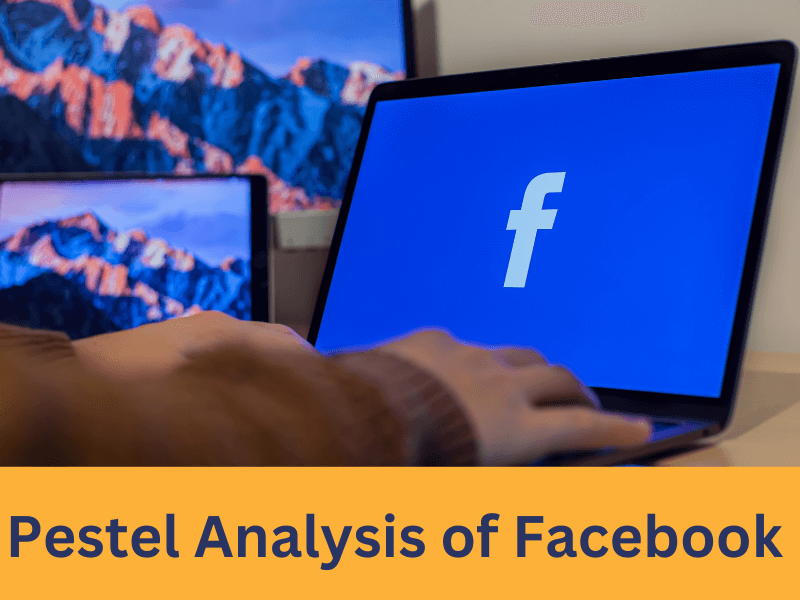 In this article, we will share the results of the Pestel analysis of Facebook. Our goal is to examine the impact of macro-environment factors on companies operating in the social media industry, particularly Facebook, the world’s leading social network.

The Pestel analysis is a strategic analysis tool that companies widely use to study the influence of various external factors on the growth of a company or an industry.

As a result, the Pestel framework allows managers to identify and measure the current and potential opportunities and threats of the macro-environment in which a company operates.

The ultimate goal of the Pestel analysis is to anticipate and adapt to the various changes in the global environment of an industry. PESTEL is the acronym for six primary components of the global market environment: Political, Economic, Social, Technological, Ecological, and Legal. 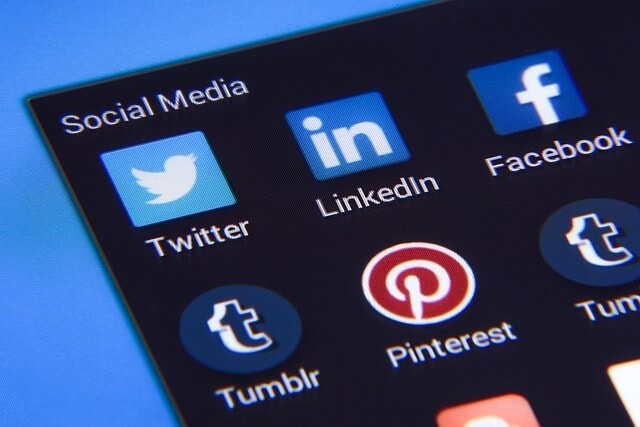 Image by Photo Mix from Pixabay

In recent years, the social media industry has been one of the fastest-growing industries in the technology market and one of the most profitable markets.

The number of social media users has more than doubled since 2010 to over 2 billion and is expected to reach nearly 3 billion by 2020. In addition, recent research has shown that 75% of people worldwide use social networks. 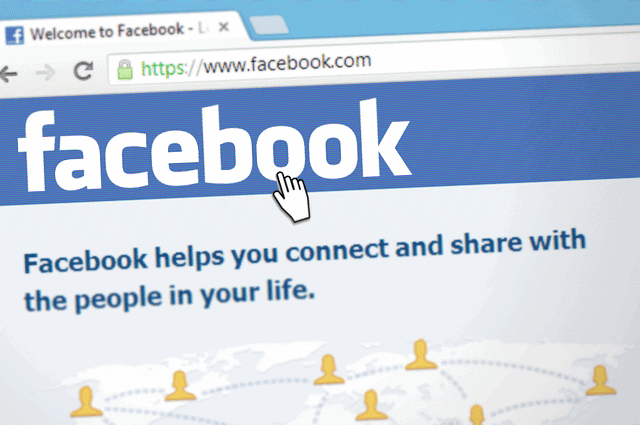 Image by Simon from Pixabay

Facebook is an American social network service and a product of Meta Platforms. Mark Zuckerberg, Eduardo Saverin, Dustin Moskovitz, and Chris Hughes—all Harvard University students at the time—founded Facebook in 2004.
As of 2021, Facebook had about three billion users, almost half of whom used it daily, making it the largest social network in the world. Menlo Park, California, serves as the company’s corporate headquarters.

This giant social media company announced in October 2021 that its parent business will now be known as Meta Platforms. The “metaverse,” in which users would interact in virtual reality surroundings, was highlighted by the name change.
Let’s continue with the Facebook Pestel analysis!

Right now, We will present the results of our research about the Facebook macro environment. For this reason, we will examine the political, economic, social, technological, ecological, and legal influences on Facebook’s performance.

Let’s start with the impact of political factors on Facebook’s performance. 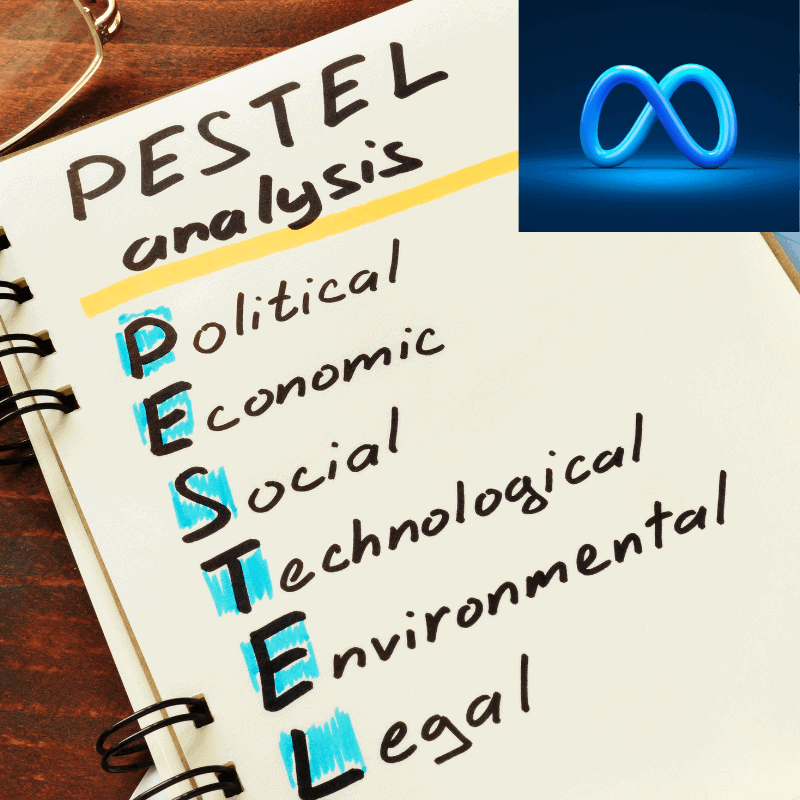 It is evident that the success of companies operating in the social media industry, like Facebook, is influenced by the political situation around the world.

Also, social media has an impact on politics. As evidence of the political antagonism between the US and other Asian countries, Facebook is restricted in China, Iran, and North Korea.

In recent months, Russia has also banned using Facebook because of the war in Ukraine and the political hostility between the two countries.

Briefly, Facebook and other American social media platforms are significantly threatened by the political tensions between the American government and other countries.

Additionally, social networks give users a platform to freely express themselves without relying on the mass press. However, many political regimes have criticized Facebook for failing to stop the spread of fake information.

On the one hand, the worldwide economic environment significantly impacts the profitability of big multinational firms like Facebook.

Therefore, the major economic indicators such as the inflation rate, the unemployment rate, labor market conditions, and the interest rates of each country influence positively or negatively the growth of the companies present there.

Thus, Facebook’s managers should consider the changes in these economic indicators to face the different threats and take the most of the opportunities present in each market.

Moreover, the business profitability of Facebook is impacted by the budgets the host country’s governments have spent on core infrastructure development. A well-developed infrastructure facilitates the business environment and increases the industry’s growth potential in these countries.

On the other hand, the COVID-19 crisis harmed consumer spending worldwide. As a reaction, most companies have been pushed to decrease their online advertising budgets on social media platforms like Facebook Ads.

So, Facebook has noticed a temporary drop in revenues, especially at the beginning of the health crisis.

Let’s be clear. Online advertisement is the primary source of revenue for social networking companies. So, any austerity policy implemented by companies selling their products and services online is a significant threat to the profitability and sustainability of Facebook.

Facebook (Meta)’s revenue in 2021 was more than $100 Billion and also the majority of this revenue came from ads that companies run on the platform.

All businesses are inevitably affected by critical social issues that affect demographics, education levels, lifestyles, family structure, and other aspects. Let’s start with the potential opportunities of Facebook’s social environment:

Recent data has led us to conclude that young people between the ages of 25 and 34 make up most Facebook users, for instance, in the United States.

Therefore, generation Z, also known as digital natives, is a hyperconnected generation, and the time they spend in front of screens is constantly rising.

All of this data point to potential future business opportunities for Facebook. These factors will enable social media companies to continuously improve their growth, increase the number of subscribers, and ensure their long-term sustainability.

Nevertheless, a lot of recent research has concentrated on information fatigue due to the misuse of social networks and their harmful effect on people’s mental health. In 1996, American author David Shenk used the term “infobesity” to describe people’s information overload.

The French scientist Jol de Rosnay, who specialized in the effects of new technologies on businesses, described it as “a new form of brain pollution generated by an excess of knowledge.” And the emergence of 21st-century technologies has worsened the situation.

Also, users have noticed in the last years that each time they scroll through their feed, they’re bombarded with ads rather than the life updates of their friends which is the reason that some users have currently begun to like different platforms over Facebook (TikTok, Snapchat).

The technological context focuses on technological developments in an industry, such as social media platforms. These advanced technologies could significantly enhance the opportunities for businesses or, on the other side, dramatically increase the risks to those businesses’ operations.

Social media companies like Facebook continuously invest huge amounts of money into studying and developing new technologies and features like virtual reality, augmented reality, and artificial intelligence to maintain their market positions and compete with rivals.

The ability to embrace new technology solutions is, without a doubt, one of the most crucial success factors for any organization operating in the social media industry. Internet users’ constant search for cutting-edge services suffices as evidence.

Missing out on these technological advancements could result in a decline in market share for social media companies. The technical challenge is enormous!

Ecological influences refer to the new laws and regulations for environmental protection and sustainable development. The sustainability of businesses like Facebook could be threatened by these ecological constraints, which are now sources of big worries.

And these pressures from green associations, NGOs, and governments do not exclude the world of social media firms. Data centers and Internet routers are infrastructures required for social media companies to operate well. But regrettably, there is no doubt that each of these substances harms the environment.

The legal system in any country where Facebook operates, including labor laws, trade laws, data protection laws, and other legislation, is subject to change. Many individuals’ private information is saved on social networking sites. As a result, Facebook is required to follow specific laws and regulations.

If not, Facebook risks being hit with astronomically considerable fines in the future! In light of the famous Cambridge Analytica controversy, many Internet users are starting to worry about the security and privacy of their data.

The most well-known social networks, Twitter and Facebook, are regularly discussed in court cases. In conclusion, the legal environment will present social media firms like Facebook Inc. with several concerns and risks in the upcoming years.

To summarize the results of the Facebook Pestel analysis, we present the significant opportunities and threats related to the Facebook macro environment.

In this Pestel analysis framework, we have identified the main opportunities and threats related to Facebook’s macro-environment.

So, it would help managers of Facebook to make the right decisions related to the strategic choices of their company through the anticipation of current and potential market opportunities and threats.

Certainly, the Pestel model is a very relevant and effective strategic analysis tool. However, it must be combined with other analyses to better understand your industry’s environment.

These include Michael Porter’s Five Forces model to analyze the competitive intensity of your industry, the SWOT analysis, and the VRIO model to examine your company’s resources and distinctive competencies.

Hopefully, this example of Facebook Pestel analysis has helped you better understand the use and implementation of the Pestel framework in your company, don’t forget to share this article with your friends and family!

In order to better understand the Pestel analysis, we invite you to read our recent free examples of the Pestel framework.